Suppose you want to annoy the people around you by running as many speakers or HDMI displays as possible at the same time off of your DE0-Nano Cyclone-IV based FPGA development board. Figuring out where to plug in your HDMI pins is stricky because is tricky because Altera provides little documentation on exactly which pins in which banks on the Cyclone IV E chip can support LVDS, many pins are already routed to the peripherals on the DE0 Nano, some pins are input-only, and LVDS pins must be at least 4 spaces from any other signal pins. In this post, through a lot of trial and error and fussing with the pin planner, I’ll document everything I know about which pins can be used.

Quartus’ pin planner is frustrating and often behaves unpredictably, especially when assigning pins in pairs. I would not recommend using it.

You can get around it by adding the following lines:

to a .tcl file, which you can then add to your project by adding the line:

to your project’s .qsf file. Alternatively, you can always directly copy and paste these lines into the .qsf file, but I like to keep them separate for readability.

Removing all pins not accessible through JP1, JP2, and JP3 on the DE0-Nano leaves us with 19 pairs:

Certain pins are input only. Assuming that you want output, the table reduces only six outputs:

Which means you can ultimately only run one HDMI cable + 2 speakers off of your DE0-Nano.

I’ve highlighted which pins these are here: 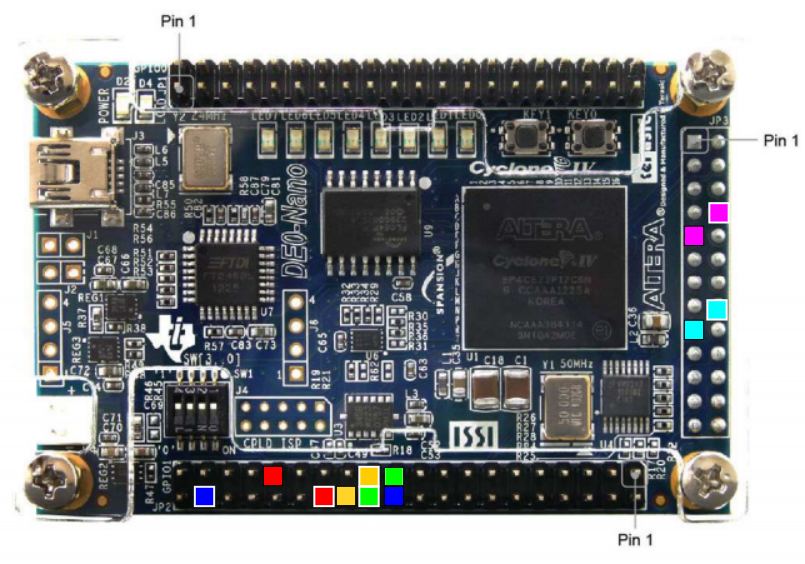 Finally, LVDS pins must be at least 4 pins away from any other used outputs. That means you may have trouble using KEY[0] and the (K15, K16) LVDS pins simultaneously, and as well as using (F15, F16) or (G15, G16) pin pairs simultaneously. Sometimes the fitter is able to cram both all pins on the same design, sometimes it can’t. Several of the DRAM pins look close to the LVDS ports, but I haven’t extensively studied which ones.

If you use pin F15/F16, you’ll have to re-assign it off of the programming pin, or else you’ll get the error:

You can fix this by adding the line:

to your tcl or qsf file.

Here’s the tcl file for declaring these pins:

thanks to Victor for fixing the de0 nano pin diagram